Good morning to everybody out there in the big mass of earth. Today its all about a Carnatic musician who is famous but is now somewhat forgotten. I may be wrong as well, but our younger generation does not seem to have the least bit of interest  in this great art. I too was like them until I came in contact with Mrs Lakshmi Devanath`s books on Carnatic music legends. I simply adored her books. The book that enchanted me the most was a book on the great Madurai Mani Iyer. I am now going to give you a very brief glimpse of his life. 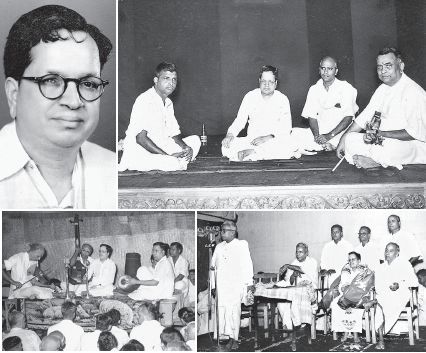 Mani was born on October 28,1912  to Madurai Ramaswamy Iyer and Subbulakshmi Amma. Little did they know that their cute boy would grow up to be a legend in the history of Carnatic music. At a very young age, Mani faced two big catastrophes. The first was the death of his uncle Madurai  Pushpavanam who was a great vidwan at his time. The second, however lend to a mixture of confidence and grief. This happened when Mani and his buddies were playing archery. Accidentally, an arrow pierced Mani`s right eye. Thankfully,a small part of the eye remained unscathed. Mani`s friends told him not to tell his parents as they would then not send him to play ever again. Mani took their advice and kept the incident a secret. But it took his parents no time to discover what had happened and immediately took him to an eye specialist who after examining the eye carefully, concluded that it was too late to save the eye as it had suffered severe damage. But he also had good news which stated that he would give a special set of glasses so that the remaining part of the eye could see. But he added that the vision of that eye would be a bit blurry. It was after this two calamities that Mani`s glory days began.

When Mani was about the age of 12, he performed in his first concert in a local Shiva temple. The very next year, a concert was organized in front of great saint and seer of Kanchi, Shri Chandrasekharendra Saraswathy Swamigal in 1925 at the Devakottai temple festival, while the Acharya was on tour to all the south Indian temples on his way to Rameshwaram. The saint blessed Mani with this very words,’‘Music shall be your all, your worship, your prayer, your god’’. On this occasion he came to the notice of the leading music critics who hailed him as a new star.  Success came to him very quickly and he became a leading musician. From 1927, Mani Iyer sang at the Music Academy on all the annual conferences till 1967 without break! He also won many awards such as the Ganakaladharar in 1944, Sangeetha Kalanidhi in 1959, President’s award in 1960, Isai Perarignar in 1962 and many more came his way. One important person who cannot be ignored in Mani’s life is Vembu Iyer. He was a simple Brahmin, who thanks to the will of the lord became Mani`s assistant who looked after him with utmost care and attention. Madurai Mani Iyer himself stated that it was as if Vembu knew his every need.

In 1943, the Elites of Tanjore arranged for a public function to honour Madurai Mani Iyer with the unique title of Ganakaladhara. The title was solely created for Mani Iyer and was never bestowed to anyone else before. Sadly, in the year 1968, in the month of June, Day 8, the great maestro breathed his last. The entire music world grieved at his loss. So my friends, Madurai Mani Iyer may have lived for a short time, but its a time glittered with achievement. His legacy lives on and it`s our duty to make sure that it stays that way.

Hope you enjoyed this trip as well, I still have many more tales to tell, but for now, it`s goodbye from my side.

I'm 16 years old. I'm an ardent Man Utd fan and on the side, I write essays and blogs, watch movies & TV shows, vigorously debate everything under the sun and hoard knowledge inside the vault that is my brain. Oh, I also read mountainloads of books and am a climate activist. What else, oh yeah I also hope to one day become the Prime Minister of India. View all posts by Vaageesh